People who do use it will know that taking screenshots with Snipping Tool is really easy and quick. You can simply open it by clicking the shortcut or press the assigned hotkey. Click New button and you can select the area you want to save. The default snip type is a rectangular snip but you can choose other options such as free-form, windows snip and full-screen snip.

After you’re done, you can choose where you want to save the image. You will always need to manually save it and then the program will close automatically before copy your image to the clipboard. Snipping Tool alone should be enough for most people, and since it’s built-in, it’s lightweight and doesn’t need many resources at all. If you want to know how to take screenshots in windows 10 the easiest, Snipping Tool is the easiest way to start.

Use Snipping Tool to capture screenshots

How to use Snipping Tool to capture screenshots in Windows 10?

Looking for a way to screenshot windows 10? This tool is easy to access and a great way to share screenshots but doesn’t expect other features to be available. Snip and Sketch is like an upgraded version and Snipping Tool, so it’s just as easy to use. Open Snip and Sketch and click the new button to initiate the screen capture.

Snip and Sketch window disappears and you’ll see a tiny menu at the top of your screen that you choose what kind of screenshot you want to take: there is rectangular, free-form, and full-screen. We don’t know why there is no option to capture a window with Snip and Sketch. Additionally, you can press the down-arrow button to delay a snip for 3 to 10 seconds, this feature is also available in Snipping Tool.

After you’re done taking a screenshot, the image will be loaded to Snip and Sketch. There you can annotate it with a pencil, pen, and other tools located at the top of the window. Save the image and you’re done, the image will be saved and copied to your clipboard. If you don’t have the snip and sketch windows 10 app, then you can download it on microsoft store for free. 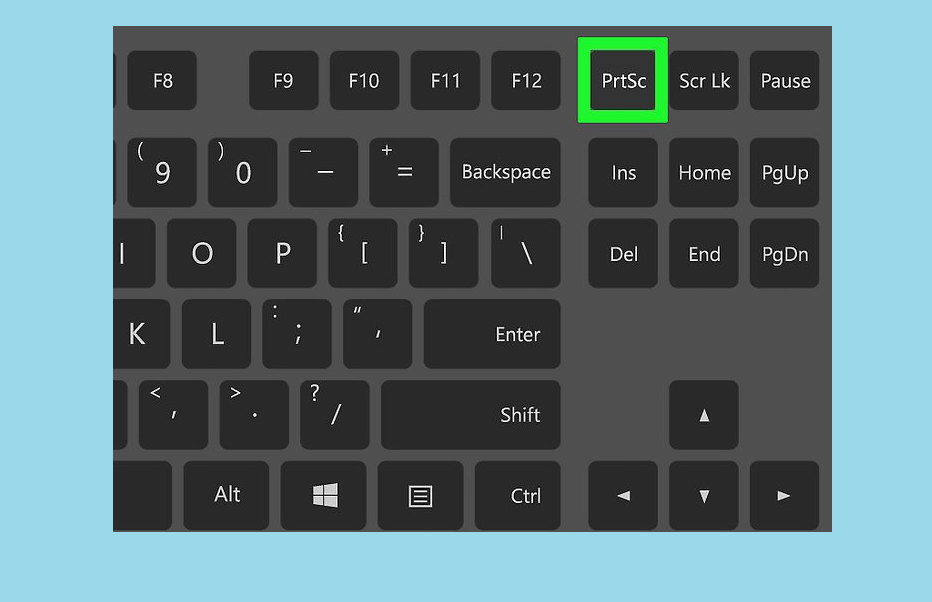 How to Take Screenshots in Windows 10

How to screenshot windows 10? Of course, you can take a screenshot as easy as pressing the Print Screen button on your keyboard. Among other ways on how to take screenshots in Windows 10, there is a simple and quick solution. Print Screen or sometimes labeled as PrtScn allows you to take a screenshot by copying it to the clipboard. You’ll need an image editing tool to see the image, Microsoft Paint will be sufficient for this. Open Paint and press Ctrl + V to paste the image on the blank canvas or paint tool. This is the best way to take Screenshots in Windows 10 which people commonly use on their computers.

How to take a screenshot on windows 10?  Use this hotkey to capture your entire screen and automatically save the screenshot into your hard drive. Your screen will go dim for briefly after you press the hotkey, it indicates that you’ve just taken a screenshot. The save location will be in Pictures > Screenshots folder.

You can use print screen windows 10 to take a screenshot. How to use it? Please press Alt + Print Screen shortcut. This hotkey is for taking a quick screenshot of the active window. Pressing it will snap your currently active window and copy the screenshot to the clipboard. Just like before with Print Screen, you need to open the image with an image editor like Microsoft Paint then paste and save the image in the folder you want.

If you are curious about how to screenshot on windows, you might have to try this! With this hotkey, you can capture a screenshot with Snip and Sketch immediately. Your screen will dim like usual and you’ll see there is a small Snip and Sketch’s menu at the top of your screen that lets you choose what type of screenshot you want to capture. Remembering these hotkeys will speed up the process on how to take screenshots in windows 8/10 significantly.

Looking for the best alternative to Windows 10 screenshots? Game Bar isn’t just a program to take screenshots. Game Bar is designed to record your gameplay and save it on your hard drive, but you can also use it to capture your computer screen. You can open Game Bar from the shortcut or press the hotkey Windows key + G.

In-Game Bar menu, you can click the screenshot button or use the hotkey Windows key + Alt + Print Screen to snap a full-screen screenshot. You can assign a custom hotkey in Settings > Gaming > Game Bar. Remember to enable these Game Bar’s features: Record game clips, screenshots, and broadcast while you’re at it.

Do you know take screenshots on PC is easy? If you’re using a Microsoft Surface device, you can try pressing certain buttons to take a screenshot of your entire screen. Hold down the Windows logo touch button at the bottom of your Surface screen and hit the physical volume-down button on the side. The screen will dim briefly and that’s when you’ll know you have taken a screenshot, and the image will be saved in Pictures > Screenshots folder.

If you want a quite powerful program that can do more than taking a screenshot on Windows 10, you might want to try ShareX. ShareX is a free and open-source program that is designed to take screenshots and upload it somewhere. Besides taking screenshots, you can also record videos as much as you want.

ShareX’s other features are: capturing with annotation along with automation and powerful workflows, capturing screenshots, editing the image taken, converting the image to PNG format, deleting the background to make a transparent version, saving the image Google Drive, creating images in all sizes, or uploading thumbnails. As you can see, ShareX can do a lot more than just how to take screenshots in Windows 10.

OBS is a free, open-source, and powerful program that is designed to capture your screen in a high-quality format. OBS is currently by millions of people who want to record their screen, save the recording, or broadcast it online. As you might already know, a lot of people are aspiring to become a famous streamer, and OBS is the best investment they can ever make. It might take some time to learn to master it, but it’ll be worth it.

Now you know how to take a screenshot on PC and Windows 10 and all the above tutorials you have to practice. If you have questions, let me answer.