Have a problem with an old computer aging system or overclocking any of the components when building the new computer? Here we suggest some software for RAM, CPU, GPU stress test to install on your computer and check its stability. This is very important to ensure that your computer will work well either in starting up or running on the programs.

This article is aimed to help you overcome the problems on your CPU, GPU and to ensure that your computer’s programs will run well along with their stability. Thus, you need software dealing with the way you do that.

In this guide, we are going to share the software you can use to overcome the problem particularly in testing the system’s components, for instance, the best CPU stress test, the best RAM stress test, and the best GPU stress test.

Check them all out below along with the additional information you may need. You may take note of some important information that may be many advantages.

The first of all thing you have to find out is the best CPU stress test. Carrying out the stress test over your CPU typically includes checking the stability of the processor which runs after the overclocking and checking if there is a cooling problem on the CPU. In order to get these two checked, the following software will be much of advantage.

Looking for the best GPU stress test? Prime95 developed by GIMPA as a computing project to find new Mersenne prime numbers. It includes the torture test in the program to ensure accurate operation in the way of searching the numbers. Many of the hardware enthusiasts adopt the torture test to assist them to stress their computer processor, particularly after they overclock the CPU and memory.

What is the best overclocking software? Aida64 is one of the best software for CPU, GPU stress test, Aida64 is a software of CPU stress test which is widely used. Compared to the torture test offered by prime95 to push the operation in an unrealistic way, Aida64 comes more practically through the mimicking real-world processes and able to load up to 100% on the test.

The only downside of Aida 64 is the charge. Yeah, it is not free. Aida64 requires you to pay $34.99 for a handful of stress tests. This is not very expensive but it is considered not ideal to take as an option among the users.

Aida64 offers a 30-day trial which is available for free. You can actually optimize this feature to try the software when you really need to use it. When you are finished, you don’t have to pay for the software installation.

More typically, the CPU stress test is performed to check the CPU’s performance after running the full speed which completely up to the maximum temperature. When you perform the CPU stress test, the cores inside the multi-core system will start to be used. later, the CPU will be tested with a justified and compatible workload.

The second thing to know after the CPU stress test is the GPU stress test. There are always a variety of options dealing with GPU stress tests. Now you can try to push your GPU maximally by one of the following benchmarks:

For your GPU stress test, heaven and valley benchmarks can be the first option on the list. It is formerly known as Unigine, too. This software is just one of the popular software to stress test your graphic card not only for stability but also after overclocking. It can also play a role as a synthetic benchmark to check how well your graphic card performs. Heaven and Valley benchmark is considered worth for a GPU benchmark that offers VR features inside.

The second GPU stress test you can try is 3DMark. It is a widely used GPU stress test that comes along with many kinds of devices such as PCs, Laptops, tablets, phones, and many others. It also has a function to monitor the clock speed, load, framerate, and temperatures when each benchmark performs.

You can get the basic edition of 3DMark for free. However, if you want the full version, you must pay  ̴$30 on Steam. 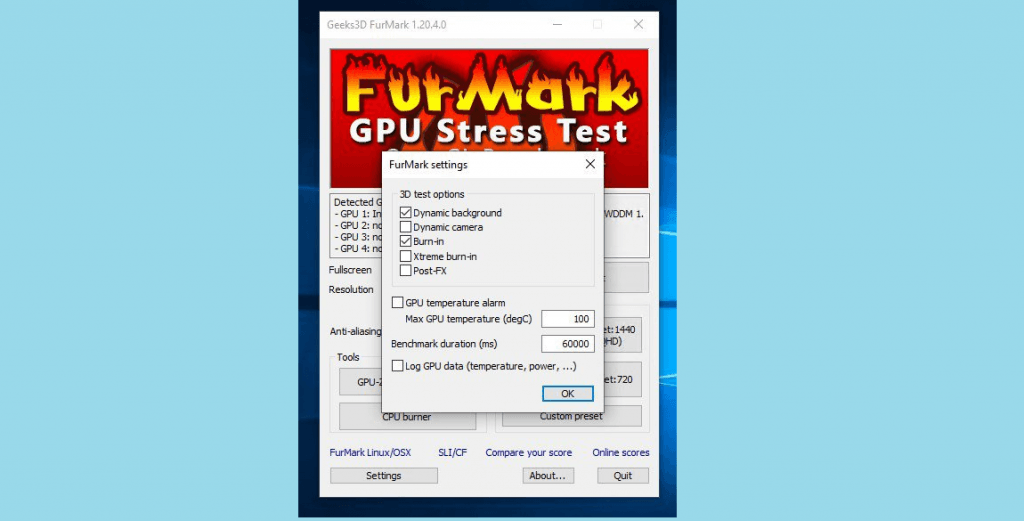 FurMark is another GPU stress test option you can try. Many enthusiasts do not prefer using this stress test due to the unrealistic amount of stress on the graphic card. FurMark can only be used for a short time. Many users say it is not the best option for your graphic card stress test.

In shorts, a GPU stress test is performed to check its limits through the optimization of its full processing power utility.

Now it’s time for you to check out the best RAM stress test, too. In relation to the software for CPU, GPU stress test, this software works out your system’s memory not only to detect any issues that may occur in your RAM but also to check the computer’s stability after overclocking. Thus, its function is the same as CPU and GPU stress test.

There are two software or tools offered to stress test your RAM we are going to present in the following.

Memtest86 is the first RAM stress test you can try to test your system’s memory and solve any issues. There is also Memtest86+ version. It was an offshoot of MemTets86 but it has not been updated since 2003, thus, it is no longer used now. If you want to stress-test your RAM, you can install and use this tool which is always updated.

The second software you can choose to help you overcome issues on RAM is Prime95 Blend test. It is a popular CPU stress test tool, however, the “blend” mode torture test serves the incredible RAM stress test. This tool is considered best to your RAM stability. Meanwhile, if you want to check the memory stability, Memtest86 is a better option.

Notice, if you have any of the troubles such as bluescreen or system reboot, you should firstly perform RAM stress test.

While you are running stress tests on your system, hardware monitoring tools are necessary to use to monitor the temperature and load levels of your system. In this concern, there are some tools or software you can consider using while you are benchmarking.

Core temp is one of the hardware monitoring tools which is also listed as a nice lightweight CPU. This tool is designed to provide you with real-time temperature reading and load percentages on your computer’s processor. It also offers readings for temperature and load on each individual core of your CPU particularly if you have an Intel processor.

Meanwhile, if you have AMD temperatures, this tool will only show a single temperature for the whole CPU.

In relation to software for CPU, GPU stress test, Core Temp supplies the basic information on your processor and tells you the CPU frequency and voltage whether they are running well or not. Additionally, there are a few handy plugins available for Core Temp that comes differently in types due to the capabilities expansion.

MSI Afterburner is the third monitoring tool you can take into the list. It specializes to monitor your graphic card hardware. However, it turns into its utility tool along with the other features that exist to accompany it. It allows you to overclock your GPU, run-in-game benchmarks, set custom fan profiles, and record gameplay video as well as take-in-game screenshots.

Now you can also consider installing and using HWiNFO64 as a part of the software for CPU, GPU stress test. Do you know? It is one of the more advanced hardware monitoring software that lets you monitor more than one core component available in your System. HWiNFO64 will also help you track both the temperatures and the other related information on your CPU, GPU, RAM, and motherboard. It additionally helps you track the fan speeds, component loads, and more.

Tips: Hardware monitoring tools should be run based on the usage. Make sure you check that your CPU is well-ventilated and cooled down properly before you decide on performing hardware stress testing. The most important to do is check whether or not the power supply is good. In this case, makes sure the power supply is good to support another program to perform well.

Which Stress Test Tool You Should Choose and Use

It is due to the fact that multiple tools will let you know how well the components in your system will help you overcome the problems. If you cannot perform one of the tools successfully, you can still try to use the others.

Having read the review about software for CPU, GPU, RAM stress test, you must find a conclusion that all the software is much recommended to use. They are all good along with their own features and ability to help you find a solution over the CPU and GPU stability.